BACK TO SCHOOL: HOW NEW YORK SCHOOLS ARE “ARMING” THEMSELVES THIS FALL 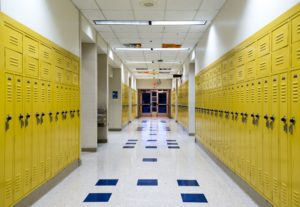 When two troubled students with military-style firearms shot 11 classmates, a teacher, and themselves at Colorado’s Columbine High School two decades ago, it completely shocked the nation. Since then, statistics from the federal government, academic and advocacy groups show these mass shooting events have recurred with alarming and growing frequency. Since the end of July 2019, mass shootings have occurred in Dayton, Ohio, El Paso, Texas, and Gilroy, California, leaving 32 dead and 64 wounded.

The youngest active shooter was at the ripe age of 12. On October 21, 2013, the young shooter killed a teacher and wounded two others at Sparks Middle School in Sparks, Nevada. He committed suicide before police arrived. On January 14, 2014, Mason Andrew Campbell, also age 12 and armed with a shotgun, began shooting in Berrendo Middle School in Roswell, New Mexico. A teacher at the school confronted and ordered him to place his gun on the ground. The shooter complied. Nobody was killed.

Unfortunately, our social immunity has evolved such that the active shooter epidemic has become a societal norm that gets lost in the headlines, or perhaps we’ve gotten so good at blocking it out for our own self-preservation that we’ve become numb to the stories. Gone are the days of “swirlies” in the boy’s bathroom. Our children are facing much more extreme forms of bullying and cyberbullying with the overpowering influence of social media and smartphone technology, which allows its users the ability to share or post information about others anonymously. Although the Dignity for All Students Act (DASA) went into to effect in 2012, its purpose was to combat discrimination, intimidation, taunting, harassment and bullying on school property—not directly addressing what could result from those acts, such as bringing a firearm to school.

Following the aftermath of the Marjory Stoneman Douglas massacre in Parkland, Florida, the National Rifle Association (NRA) urged Americans to embrace a proposal which would allow schools to arm teachers as a way to prevent further mass shootings in schools. President Trump supported this proposal, sparking a national debate over whether the individuals responsible for our children’s education should bear the added responsibility of utilizing firearms to protect them. New York’s response is a solid “no.”

On July 31, Governor Cuomo signed legislation limiting an educational institution’s ability to authorize any person who is not primarily employed as a school resource officer, law enforcement officer, or security guard to carry a firearm on school grounds, and further directs the New York State Police to establish statewide regulations aimed at strengthening existing gun buyback programs and creating new programs for the safe removal of illegal, unsecured, abandoned, or unwanted firearms. This legislation comes on the heels of the Red Flag Law signed in February 2019, which prevents individuals who show signs of being a threat to themselves or others from purchasing or possessing a firearm, and allows a judge to order the confiscation of a person’s guns if law enforcement, school officials, or a family member signs a statement stating they believe the person to be a potential danger to themselves or others. This of course is followed by a due process hearing, wherein evidence is presented, including things the person might have said to others on social media. After that, if the judge finds the evidence “clear and convincing,” they could extend the protection order for up to one year. This law took effect on August 24.

Will these statutory amendments effect change and put a stop to mass shootings in schools? A study published by the American Psychiatric Association (APA) in 2018 found that risk-based firearm seizure laws (red flag laws) in Connecticut and Indiana positively affected suicide rates. So, there is certainly promise for New York, though many remain skeptical.

With school right around the corner, parents may ask themselves what protections are in place in New York public schools to shield our children from those who seek to commit violent acts? Many schools have a school resource officer (SRO) and security staff. In July 2000, the Safe Schools Against Violence in Education Act (Project SAVE) was signed into law to promote a safer and more effective learning environment within New York schools. Project SAVE requires, in part: district-wide school safety plans; building-level emergency response plans; codes of conduct; uniform violent incident reporting; instruction in civility, citizenship and character education; and school violence prevention training. The purpose of a school safety plan and building-level emergency response plan is to define how each school district (and individual school buildings within the district) will respond to acts of violence and other disasters through prevention, intervention, emergency response and management. Districts must submit their safety plans to the New York State Education Department (NYSED) online.

In 2016, New York State Education Law §2801-a was amended to require, in part, that each district develop policies and procedures for contacting parents, guardians or persons in parental relation to a student in the event of an implied or direct threat of violence by a student against themselves, including a threat of suicide. In addition, §2801-a was amended to now require twelve fire and emergency drills per year. Four must be lockdown drills, the remaining eight are required to be evacuation drills.

On July 16, 2019, the P-12 Committee presented an amendment as an emergency measure to §155.17 of the Commissioner’s Regulations relating to school safety plans to implement Section 32 of Part YYY of Chapter 59 of the Laws of 2019. This proposed amendment more clearly defines the relationship between a school district or charter school, school personnel, students, visitors, law enforcement, and public or private security personnel. Specifically, the amendment requires a “… school district or charter school that employs … public or private security personnel, including school resource officers, [to] establish a written contract or memorandum of understanding that is developed with stakeholder input, including, but not limited to, parents, students, school administrators, teachers, collective bargaining units, parent and student organizations, and community members, as well as probation officers, prosecutors, defense counsels, and courts that are familiar with school discipline.” Such contract or memorandum of understanding shall be consistent with the code of conduct, define law enforcement or security personnel’s roles, responsibilities and involvement within a school and clearly delegate the role of school discipline to the school administration and must be published as part of the district safety plan.

Following the 60-day public comment period required under the State Administrative Procedure Act, it is anticipated that the proposed amendment will be presented to the Board of Regents for adoption at the October 2019 Regents meeting. If adopted, the proposed amendment will become a permanent rule on October 23, 2019. A second emergency adoption will also be necessary at the October Regents meeting to ensure that the emergency rule adopted by the Board of Regents at its July 2019 meeting remains in effect until it can be adopted as a permanent rule.

As the children of our community prepare to head back to the halls of learning, it’s important to understand that one out of every four of them has been exposed to a traumatic event that can affect learning and behavior. After a crisis or traumatic event, about 25 percent of victims and witnesses of violence develop PTSD, depression, or anxiety disorders.  As such, many schools are now also embracing the approach of educating with a “trauma-informed” model.

Trauma comes in many forms. Sources of trauma include but are not limited to, child abuse and neglect, serious accidental injury, disasters and terrorism, divorce, homelessness, medical treatment for life-threatening illness, and violence in neighborhoods, schools and homes. Signs of traumatic stress include fear, anger, withdrawal, trouble concentrating, digestive problems, and nightmares. In an educational setting, trauma displays itself through academic failure, higher drop-out rates, higher rates of absenteeism, expulsion, and suspension.

According to the New York Center for School Safety and the National Child Traumatic Stress Network, adults in the school community should be prepared to recognize and respond to those who have been impacted by traumatic stress which can occur from a variety of sources: bullying at school, dramatic weather events, school shootings—even day-to-day exposure to events such as divorce or homelessness. The goal is to not only provide tools to cope with extreme situations but to create an underlying culture of respect and support. Access to evidence-based interventions in the school setting as a response to trauma of any kind can reduce or eliminate the need for a student to receive future mental-health services. Students who are exposed to evidence-based interventions and the support of a trauma-informed school can acquire skills to help them manage the burdening impact of trauma and prevent the negative side effects that come with exposure to traumatic events.

This article was published in the Daily Record in August 2019.