Timber! Rights and Obligations of Landowners and their Trees 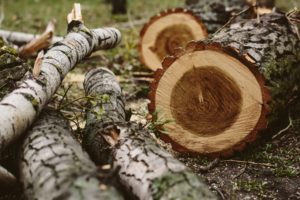 On what began as a regular Sunday afternoon on October 15th, Rochester experienced another one of its famous spontaneous whirlwind rain storms. One second, sunshine and blue skies, the next, a wind storm that pulled trees out of the ground and sent branches flying. Its terrible force even caused my home and many others to lose electricity for multiple hours. Driving to work early Monday morning I saw the power lines down due to fallen trees, and that was not the only place trees fell. All over the area property owners had everything from entire trees to little branches littered on their land.

In the wake of this destructive act of Mother Nature many landowners may notice that the tree or branch that was thrown onto their property came from their neighbor’s property. A structure like a fence or barn may have even been damaged as a result. Lucky landowners will have homeowner’s insurance cover the damage, but many less fortunate will not. As these storms are regular in the Rochester area, the common questions posed by property owners are who is going to pay for the damage? What if it had been worse? What can I do to protect my property?

New York State courts have discussed many different areas of law in relation to neighbor disputes about trees. An action in trespass is analyzed by courts as a preliminary matter. The Court of Appeals decided early on in 1985 that a neighbor who allows a healthy tree to grow naturally and cross over into the adjoining owner’s property airspace, “cannot be viewed as an intentional act so as to constitute trespass because overhanging tree branches are not an intentional invasion of adjoining property.” Ivancic v. Olmstead, 66 N.Y.2d 349, 352-353 (1985). This rationale centers on the landowner’s lack of intentional invasion. In other words, because the tree owner has done nothing to actively cause the tree to encroach on another’s property, they have not trespassed on their property.

However, the idea that liability can be escaped as long as no action is taken to invade another’s property only extends so far. Under a negligence action, the same Court in Ivancic held that liability will attach to a landowner whose tree falls outside of his premises causing damage if there exists “actual or constructive knowledge of the defective condition of the tree.” Ivancic, 66 N.Y.2d at 350-351. There are two elements to prove for this type of action: (1) the tree has to be in a defective condition; and (2) the landowners needs to have actual or constructive knowledge of this condition. Therefore, if a perfectly healthy tree is torn from the ground by a windstorm, the landowner is not responsible. Similarly, if a decrepit tree falls during a storm, but the landowner never had constructive or actual knowledge that the tree was decaying, they cannot be held liable.

The Ivancic decision and its offspring of cases are important assets for concerned landowners seeking to protect their homes and those they care about from all types of dangerous conditions. First, as a concerned landowner, it is important to put the neighbor who is harboring a dilapidated tree or other dangerous condition on notice of the condition. Actual knowledge is established when it can be shown that the landowner had literal knowledge of the defective condition. Constructive knowledge can be found where a landowner is presumed to have such knowledge since it is obtainable by the exercise of reasonable care.

This is where attorneys can make a critical difference at minimal cost. If litigation is eventually pursued, any neighbor facing potential liability is going to deny having knowledge of the dangerous condition. Not only can a well drafted letter by an attorney put a difficult neighbor on legal notice, but it may even prompt them to be proactive about liability and remedy the condition. A legal letter is often the best spur to action for a non-responsive neighbor.

Sometimes even protecting your residence in case of future injury is not enough. Concerned property owners may feel that something needs to be done about a condition before the worst happens. In that case, the action to be pursued is one founded in nuisance law. A private nuisance is found by courts when a condition interferes with “the use and enjoyment of land amounting to an injury in relation to a right of ownership in that land.” Turner v. Coppola, 102 Misc. 2d 1043, 1045 (N.Y. Sup. Ct. 1980); citing Kavanagh v. Barber, 131 N.Y. 211 (1892).

In terms of trees, New York law has established that although trees ordinarily are not nuisances, they can be if decayed or otherwise dangerously unsound. Turner, 102 Misc. 2d at 1045; citing Gibson v Denton, 4 App Div 198 (1896). In order to determine this, experts may be required to report on the condition of the tree. Additionally, in a rare case, a nuisance per se can be found when a tree is poisonous or noxious in its nature. Turner, 102 Misc. 2d at 1045. If a strongly worded demand letter is not sufficient, a suit against the offender in an action founded in nuisance can result in an order from the Court that the offending landowner remove the condition immediately.

For those “do-it-yourself” concerned landowners, sometimes self-help is a valid and sufficient remedy. However, I would strongly urge individuals to exercise care before destroying another’s property, even if it is something many would consider valueless.

It has been held that a property owner may resort to self-help in the removal of overhanging tree branches that encroach onto one’s property. Coffey v Gerelli, 2017 N.Y. Misc. LEXIS 2372, *3 (2d Dept. 2017). In a recent case from June of 2017 that went all the way to the Appellate Court in the Second Department, it was held that although a landowner has a right to ordinary trimming and clipping of the overhanging branches onto their property from an adjoining landowner, this right does not extend to destruction or injury to the main support systems of the tree. Coffey, 2017 N.Y. Misc. LEXIS at *3. Further, other cases have found that a property owner may not go beyond the property line to cut or destroy part or all of a tree on the adjoining land unless the tree becomes a private nuisance, due to its rotted and diseased condition. Childers v New York Power & Light Corp., 275 App Div. 133 (3d Dept. 1949).

In fact, some courts have even gone so far as to say that if the facts demonstrate that the landowner “has failed to afford himself of the right to protect his own property by removing the encroaching branches and roots[,] there is no need to have his action proceed in a separate, expensive civil action.” In Re Black, 2002 N.Y. Misc. LEXIS 1442, *9 (NY Sup. Ct.). Language such as this suggests that some judges may require parties to engage in limited and reasonable self-help measures before proceeding to court.

Despite the apparent authority from courts for landowners to take matters into their own hands, the rights and obligations of parties in these situations is often unclear. Often the law depends on very fact specific questions and even determining the property line is not always easy. As a final word of caution, remember to consult a lawyer before pulling out your handy chainsaw.

Robert Marks is a Law Clerk in the Litigation Department at Boylan Code LLP and a recent graduate of the Syracuse College of Law.