LEGAL RECOURSE FOR THOSE WHO SUFFER ALLERGIC REACTIONS AT RESTAURANTS 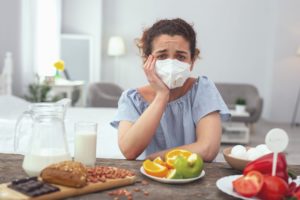 It should no longer come as a surprise that food allergies are the sixth leading cause of chronic illness, with over 32 million Americans diagnosed with a food allergy in the United States.  As one of the 32 million people who suffer from a food allergy, I can proudly say that our society’s awareness and safety have greatly improved with respect to this condition.  Nonetheless, for some of us, allergic reactions are essentially unavoidable events with significant health and monetary consequences.  Although allergic reactions can occur for many reasons, one of the most common circumstances in which an individual is likely to experience a reaction is when they eat at a food vendor.  For those with severe food allergies, eating out amounts to literally putting our lives in the hands of another.

An allergy is defined as a chronic condition involving an abnormal reaction to an ordinarily harmless substance.  In addition to common seasonal allergies to pollen and rag weed, over 170 foods have been found to cause allergic reactions.  The eight most common food allergies are identified by the Food and Drug Administration and are required to be listed on food labels of packaged food products.  Allergists are able to diagnose an individual with an allergy, as well as test for additional potential allergens by a skin-prick test, or blood test.  Food allergies are currently incurable and unpreventable.  An allergy is to be distinguished from an intolerance.  An allergy is an immune system response, whereas an intolerance is a digestive system response.  An individual who is intolerant to a food may still eat the food, but will likely have uncomfortable gastrointestinal side effects.

An allergic reaction occurs when an individual’s immune system, in its infinite wisdom, views the seemingly harmless substance as an invader and attacks the substance.  When the immune system attacks the substance, a number of symptoms may appear.  These allergic reactions may range from developing hives, wheezing, itching around the lips or mouth, swelling of the lips, tongue or throat, shortness of breath, and vomiting.  Anaphylaxis is a life-threatening reaction to an allergen that causes narrowing of the airways and can block breathing.  Symptoms of anaphylaxis can include not only narrowing of the airways, which makes it difficult to breath, but facial flushing, itching, and shock.  In the same individual, symptoms vary from each and every reaction.  Further, an individual with a food allergy can present symptoms of a reaction immediately and/or up to two hours after contact.

Currently, if an allergy is too severe to treat with allergy shots, the only recommended preventative measure is to simply avoid the allergen, which is easier said than done.  Constant vigilance is required for individuals with allergies who, out of necessity, read all packaging carefully for any ingredients and learn ingredients that may not clearly alert someone that an allergen is present.  For instance, an individual allergic to a protein in milk, casein or whey, must look for other names for milk, such as calcium caseinate, and even may need to avoid products labeled as “non-dairy” that have casein, but not the sugar found in milk, lactose.

Allergic reactions can be caused by direct consumption, or by cross-contamination. Cross-contamination occurs when an allergen is transferred from one food containing an allergen to a food that does not contain the allergen.  For example, if a chef cooks a cheeseburger on a grill and then cooks a hamburger, the residue from the dairy could cause an allergic reaction. This phenomenon is a major concern in restaurants and it is extremely difficult to manage where many different meals are being prepared on one cook surface.

With that in mind, it may not shock you to learn that accidental reactions happen all the time, especially when the individual diagnosed with an allergy is not acting as their own chef.  Depending on the severity of the allergy and prevalence of the allergen, it is all too common to have allergic reactions.  Although it certainly has been known to occur at a nice family meal (most of my immediate family has accidentally “poisoned” me at some point in my life – they’re forgiven), the most likely place that these accidental reactions occur are at food vendors.  These inevitable events carry severe consequences and oftentimes the individual who suffered the reaction carries the significant emotional and monetary costs associated.

Thus, it is important to know that individuals who suffer from allergic reactions increasingly may seek legal recourse to cover the costs associated with their injuries.  Negligence is generally defined as the failure to use reasonable care that results in an injury to another.  To establish a prima facie case of negligence, a plaintiff must prove three elements: “(1) a duty owed by the defendant to the plaintiff, (2) a breach thereof, and (3) injury proximately resulting therefrom.”  Pasternack v. Lab. Corp. of Am. Holdings, 27 N.Y.3d 817, 825 (2016).  Another claim often asserted by those who suffer allergic reactions is for breach of an implied warranty, which “is a guarantee by the seller that its goods are fit for the intended purpose.”  Wojcik v. Empire Forklift, Inc., 14 A.D.3d 63, 66 (3d Dep’t 2004).  You may think that the application of that fancy legal jargon is relatively straightforward with this type of case (i.e. “they gave me food I had an adverse reaction to”), but there are a few pitfalls that these types of cases will have to surpass.

First and foremost, in order for the food vendor to have breached a duty to the individual, the individual will normally have to show that the vendor was aware of the allergy.  In a recent case from Michigan, a woman with a severe shellfish allergy ordered wonton soup without informing the server of her allergy.  Norde v. P.F. Chang’s China Bistro, Inc., No. 2:16-CV-13595, 2017 WL 4918532 (E.D. Mich. Oct. 31, 2017).  Importantly, the P.F. Chang’s regular menu itemizes wonton soup’s ingredients, which includes shrimp, but the woman reviewed and ordered off the non-complete lunch menu.  Id.  Thus, her failure to warn the server of her allergy proved dire.  In fact, as a prior consumer of P.F. Chang’s, I know from experience that they offer a menu that details all menu options with their respective allergens.  Regardless, in this case the woman unknowingly consumed the wonton soup with shrimp and suffered an allergic reaction.  Id.  Eventually, she was taken to the hospital where, tragically, she lost consciousness and hospital personnel placed her in a medically induced coma for several days until she recovered.  Id.  Ultimately, the Michigan Court found that P.F. Chang’s had not breached a duty of care to the woman despite her reaction because P.F. Chang’s provided sufficient warning to the woman that the wonton soup contained shrimp and she crucially failed to warn the server of her allergy.  In other words, since P.F. Chang’s was unaware of the allergy, it acted with reasonable care by providing edible wonton soup.

Accordingly, and as the P.F. Chang’s case noted, most restaurants will now put on their menu something along the lines of: “Before placing your order, please inform your server if a person in your party has a food allergy.”  This language serves as a valuable defense for restaurants who can use the failure of their consumers to inform them of an allergy as a defense to negligence since they knew the risks and failed to take advantage of the precautionary measures offered by the food vendor.  Depending on the state, restaurants’ obligations to put these types of precautionary measures in place may be significant.

Another issue that is prevalent in these types of cases is the necessity to prove causation.  For example, in a Massachusetts lawsuit from 2011, a woman sued Uno Chicago Grill after suffering an allergic reaction to their food.  Hampton v. Riverfront Foodservice Corp., 79 Mass. App. Ct. 1118 (2011).  In Hampton, the woman ordered a gorgonzola cheese and walnut salad, but, believing that she might be allergic to gorgonzola cheese, she asked if feta cheese could be substituted for the gorgonzola cheese.  Id.  In doing so, the woman did not mention to the server that she might be allergic to any particular substance-either cheese or walnuts.  Id.  In response the waitress said that she would check on the availability of the feta with the kitchen.  Id.  Sometime later, the salad arrived without explanation and the woman assumed that feta cheese had been substituted for the gorgonzola.  Id.  Unfortunately, after several bites, she experienced a severe allergic reaction and ultimately had to spend the night at the hospital.  Id.  The woman filed a lawsuit and claimed damages in excess of $10,000 in medical costs and additional damages for emotional distress stemming from her allergic reaction.  Id.

Interestingly, the Massachusetts Court in Hampton found that causation had not been proved by the woman because there was no evidence in the record (expert or otherwise) that established that the woman was, in fact, allergic to gorgonzola cheese.  Id.  Rather, it was merely alleged by the woman that she had previously reacted to gorgonzola cheese and that she had never had a reaction to any of the other ingredients in the salad.  Id.  The Court found that to be insufficient evidence.  Id.  In other words, the Hampton Court was unwilling to make a causal jump to conclude that it was in fact the gorgonzola cheese that caused the adverse reaction.  Id.  Thus, it is important for people who believe they have food allergies to get tested by allergists for confirmation.  Causation may also prove to be a great issue for those who suffer a reaction as a result of cross-contamination since the food vendor will undoubtably argue that they provided food that did not explicitly contain the allergen in its ingredients.

The last hurdle to consider before choosing legal recourse is to evaluate the value of your case.  As you might expect, the value of a case will depend upon the severity of injury and the amount of medical costs associated with the reaction.  As explained above, all reactions are different and result in varying symptoms.  Some, like the Hampton case discussed above, can result in significant damages to the injured party.  See Ware v. Checkers Drive-In Restaurants, Inc., No. 1:17-CV-2109-AT, 2017 WL 10378127, at *1 (N.D. Ga. June 30, 2017) (Plaintiff sued Checkers Drive-In Restaurants, Inc., alleging more than $75,000.00 of damages, for putting onions on her burger order when she asked for no onions, which she claims caused her to suffer an allergic reaction).  Although an individual may have a clear-cut case against a food vendor for negligence, oftentimes the lack of severity of the reaction will essentially preclude a formal lawsuit.

In the last twenty years alone, the food industry has made amazing strides to promote safety and awareness for those with significant food allergies.  As time continues to progress, we may reach an age where an allergic reaction is no longer an inevitable event for those who manage severe food allergies.  Until that time, it is important for the food industry to continue to improve their quality of services and for consumers to be aware of their legal right to relief.

This article was published in the Daily Record in June 2019.