THE 50TH ANNIVERSARY OF THE FOURTH DEPARTMENT’S MINISKIRT DEBATE 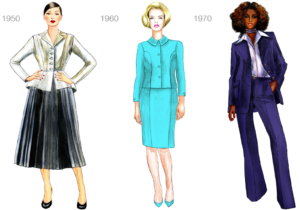 2019 marks the 50th anniversary of several culturally significant events – Woodstock, Stonewall Riots, Beatles’ break-up, and Neil Armstrong’s small step, just to name a few. With little ballyhoo, October 30, 2019 will also be the golden jubilee for the Fourth Department’s decision of Peck v. Stone.[1] While the case certainly doesn’t rank the same historically, it offers a local snapshot into America’s Women’s Rights Movement during that pivotal period of time.

Carolyn R. Peck was a 27-year old, newly admitted attorney who found herself in contempt of court.  Specifically, Hon. John R. Farnham, then nearly 75 in age, issued an order in the City Court of Syracuse prohibiting Ms. Peck from “appearing as an attorney in his court until [her] mode of dress was ‘suitable, conventional and appropriate.’” The wardrobe malfunction in question was a miniskirt, i.e., “a dress, the hemline of which was approximately five inches above the knee.”  It seems Ms. Peck had already been reprimanded by another judge for her inappropriate courtroom attire, yet she persisted. Judge Farnham found her defiance of this unwritten wardrobe rule disrespectful and her dress “not suitable for courtroom appearance [as it] detracts from the dignity of the Court and impairs authority.” Ms. Peck appealed the Court’s contempt order to the Appellate Division of the Supreme Court, Fourth Judicial Department.

It is important to note that the 1960’s miniskirt was not just another passing style. It was a symbol of women’s rights, feminism and liberation. “It was a sign of a new attitude for those who wore it…it symbolized to those around them that times were changing and women were active and visible.”[2] The miniskirt was worn by feminist leaders such as Gloria Steinem, who were demanding equality in the workplace. With the passing of Title VII of the Civil Rights Act in 1964, and the establishment of the Equal Employment Opportunity Commission in 1965, women had newfound opportunities in court to challenge sex discrimination at the workplace.[3]

Ironically, the courts themselves were lacking in equality, with few female members of the bar. At the time of Peck v. Stone, only 1 in every 25 lawyers in America was a woman.[4] On a local level, in 1958 only 12 of the 768 members of the Monroe County Bar Association were women. [5] Female attorneys like Ms. Peck were fighting a firmly established patriarchy in the legal profession.  In a damning 1963 hiring survey of law firms published in the Harvard Law Review, reasons cited for their negative ratings of female candidates were “women can’t keep up the pace”; “bad relationship with the courts”; “responsibility is in the home” and “afraid of emotional outbursts.”[6]  One could only assume Ms. Peck’s employer found her contempt of court another example of a woman’s “bad relationship with the courts.”

With this background, Peck v. Stone goes beyond how many inches is acceptable for a hemline to rise.  While the words “women’s rights” or “liberation” are absent from the decision, the concepts are inescapable. It is difficult to view the case as anything but the plight of feminism in the courtroom – making the Fourth Department’s decision all the more interesting. Can Ms. Peck and her miniskirt get the Court to “stop criticizing what they can’t understand” – “to get onto the new road and just lend a hand”?[7]

In 1969, the Appellate Division, Fourth Department consisted entirely of men (it would take another 12 years for Hon. Delores Denman to change that). The oldest of which, Hon. Frank Del Vechio, born in 1903, issued a well-written opinion in support of the City Court’s order of contempt. Citing an out of state decision[8] upholding a school district’s expulsion of a student who had the audacity to wear a Beatles’ moptop hairstyle, Judge Del Vechio determined a court has the inherent power to preserve order and decorum. Armed with a photo of Ms. Peck’s dress, the Judge thought the hemline “much more than five inches above the knee” and “substantially higher when she was in a sitting position, as she would be most of the time in the courtroom…”  He also concluded the dress was “an unusual, immodest and exaggerated mode of dress which was a conspicuous departure from accepted courtroom custom in Syracuse, New York in early 1968 [that] could result in the distraction of others and disrupt and impede the maintenance of proper courtroom atmosphere and decorum.”

Judge Del Vechio, however, offered his opinion in dissent.  The majority decision was authored by the newest and youngest member of the bench, Hon. Domenick Gabrielli.

Judge Gabrielli, on behalf of the majority, agreed that a judge has broad discretionary power to enforce order and control behavior in the courtroom, but decisions derived from that power must still have a reasonable or plausible basis.  In this case the “record fails to show that petitioner’s appearance in any way created distraction or in any manner disrupted the ordinary proceedings of the court.” There was also no evidence Ms. Peck showed any lack of respect for the court, just the opposite. “[S]he was at all times respectful, reserved and at no time could her demonstrated attitude in any manner be considered contrary to her ethical responsibilities as an officer of the court.” “Whatever may be one’s personal judgment as to the propriety of petitioner’s dress, we are compelled to conclude that it has become an accepted mode of dress, not only in places of business or recreation, but, to the consternation of some, in places of worship.” In the end, while recognizing Judge Farnham’s sincerity and well-intentioned motives, the Fourth Department determined his discretion was improvidently exercised and the order of contempt against Ms. Peck was therefore, reversed.

Peck v. Stone generated little commentary, but it has been cited and relied upon by other courts to reverse orders: (a) holding a young female attorney in contempt for wearing a sweater and open-collared blouse[9]; (b) prohibiting  pant-suited women attorneys in the courtroom[10]; and (c) prohibiting turban wearing attorneys from practicing in court.[11]  Again, without any reference to “women’s rights”, this local decision reflects a step toward equality, all thanks to Ms. Peck and her hemline…for the times they are a-changin’.

Written by: Devin L. Palmer, Esq.
This article was published in the Daily Record in October 2019.